You can’t help but share a quick chuckle with Bobby Williams when he tells you how he got started in the game of tennis.

“Two $9.99 rackets at Wal-Mart at the age of 57,” said Williams, a Torrance resident, of the 10-year-old memory in his slow Southern accent having moved here for work from Louisiana back in 2013. “I was at my club lifting weights and saw these two guys running around the courts chasing a ball. I figured I could do that.”

He repeats, in somewhat of a disbelieving tone: “Two $9.99 rackets at Wal-Mart.”

From those humble beginnings, Williams still remains a NTRP-rated 3.0 player, but it’s the work Williams has done off the court – not on it – that led him to recently being named the USTA League Captain of the Year for the entire section. 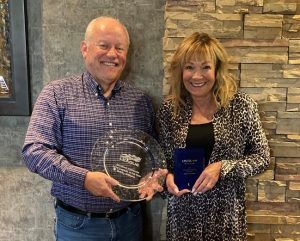 The Captain of the Year honorees are selected by the USTA SoCal Area League Coordinators and recognizes the best and brightest captains from 13 Southern California areas. The third annual USTA League Captains’ Luncheon was held at Seasons 52 in Costa Mesa on Feb. 22, and Williams was named the overall Captain of the Year. To see more on all the area USTA SoCal Captains of the Year, click HERE.

“It’s very humbling and I’m honored to receive the Captain of the Year Award,” said Williams, 67, who got the league tennis bug back 2010 and has captained teams to State and Sectionals in Louisiana and Beach Cities. “It’s totally undeserved. When I sat there listing to the second and third winners I was looking to crawl under the table. Now I know how it feels when folks get an award like that in front of so many deserving people.”

Williams joined the West End Club in Torrance and wanted to get some of his new tennis buddies into a 3.0 league. Problem was, there weren’t any 3.0 leagues competing out of his club.

“I count Bobby as solely responsible for the success of the 3.0 Men’s Division in Beach Cities and in our Local League Friday night Tri-Level Mixed Doubles,” said Gayle Hollenbaugh, Beach Cities Area League Coordinator said. “I realized one season alone he had 12 teams he was serving as captain for.”

Williams said one of his matras is let everyone play. “If I have any kind of rule I go by, it’s If you are on the team, you play.”

On a sad note, Williams and his wife plan to leave the area on March 5 and settle in Scottsdale, Ariz., for retirement. “My wife is already trying to get me to another club in Scottsdale to see if they need any league captains,” Williams said. “I’m digging my fingernails into the side of the wall to hold off moving as long as I can.”

Williams said the date is set for March 5, but with five of his teams currently shooting for the playoffs, he said he would be around to finish the season. “If any of them win a league title, I would come back and play,” he said.

A great recruiter, Williams said he’s had a half dozen past players who are now captains after “they said they’d never do it.”

Williams has taken a total of six teams to Nationals.

“If I didn’t love it, I wouldn’t be doing it,” he said. “I captain to just play and to get others involved.”