Word began to leak sometime around the first week of December via several Tweets, and Brandon Nakashima confirmed it on the 10th day of the last month to Tennis.com the biggest decision of his young 18 years had been made: He had decided to turn professional and not return for his sophomore season at the University of Virginia.

Nakashima’s No. 1 supporter for his entire tennis journey, the one who has been by his side taking him to hundreds of practices and sacrificing countless weekends traveling to tournaments over the years is his mother Cris Nakashima, who credits many deserving coaches who have worked with Brandon since age 7. Cris said early developmental coaches Angel Lopez and Woody Blocher were instrumental in teaching the basic fundamentals of the game to Brandon. It wasn’t until Brandon began working with Larry Stefanki that “everything came together,” from ages 11 years old to 16. “Larry guided me in so many ways and always focused on the developmental aspect and gave me such good advice over the years,” Cris said, adding that Christian Groh has also been working with Brandon for a brief period before he entered UVA.

The San Diego resident Cris recently answered several questions posed to her about her son’s decision to turn pro, and confirmed that Brandon had signed with professional management company GSE Sports Marketing to represent him as a pro. He will work with Chris McCormack and John Tobias, who manage the careers of tennis pros Grigor Dimitrov, Genie Bouchard, Danielle Collins, Sam Querrey and the Bryans brothers.

“We have been very impressed with their level of professionalism, integrity and follow-through,” said Cris as the reason for signing with GSE.

The decision to turn pro was a tough one for Brandon, who of course consulted with his family about the decision. Cris said the one season Brandon spent at Virginia improved his game greatly. Playing mostly No. 2 singles, Brandon went 17-5 overall and was named the ACC Freshman of the Year.

“I cannot say enough positive things about Brandon’s five months at the University of Virginia, where I believe he grew tremendously on and off the court,” Cris said. “Experiencing college tennis was definitely the right decision for my son and I would recommend it to any top junior, who feels he or she needs more time to develop physically, mentally or emotionally. Brandon developed some life-long friendships at UVA, who will always be there for him for the rest of his life.”

In the fall, Brandon decided to not return to campus and see how he would fare in some big professional events. The good results ultimately led Brandon to his decision. Ranked No. 942 in the world in September, Brandon leaped to No. 370 in just seven tournaments, defeating name pros Taro Daniel, James Duckworth, Michael Mmoh, Chris Eubanks and former UVA star Thai Kwiatkowski along the way.

“Definitely these results have helped me gain a lot of confidence in my game and it shows that I can play with these top guys,” Nakashima told Cale Hammond of Tennis.com. “It was a tough decision but this is what’s best for me and I’m happy to start my professional career. I’m looking forward to competing against top guys and hopefully continuing to improve my game.” 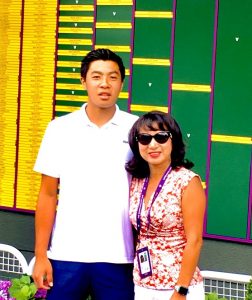 Competing against top guys is exactly what Brandon did at the recent Hawaiian Open, an exhibition that kicked off the new decade. A late replacement for the injured Kei Nishikori, Brandon beat world No. 31 Taylor Fritz in straight sets, then took a set off Sam Querrey and held two match points before Querrey’s big serve boosted him to a 13-11 tiebreaker win.

Cris said the results over two established SoCal ATP touring pros further proved Brandon may be on his way to successful professional career. “A significant reason he made the decision was simply the fact that Brandon’s tennis level really improved over the course of 2019,” Cris said.

“His UTR climbed from 13.96 to 15.02, especially after some success at the USTA Challengers in the fall. Brandon currently has the highest UTR among American college players and the second highest UTR for 18-under players worldwide (only behind Jannik Sinner of Italy). During this period, Brandon’s ATP pro singles ranking also climbed from approximately 800 to 367.  At the end of the day, he truly felt like he was ready to make the jump to pro tennis.”

And Cris continued that the reason for the vast improvement was the “very productive college experience at UVA” and the fact that the USTA granted Brandon several wild cards into USTA Challenger in the fall.

“We’ve been really appreciative of the USTA’s recent support from a coaching and competitive opportunity (wild card) standpoint,” Cris said. “The experience of training and competing with some of the best ATP and challenger players in the world has been incredible for Brandon and we are so grateful of USTA Player Development for this level of support.”

“As a family we’ve always wanted him to be a well-balanced individual besides a tennis player,” Cris said. “Brandon’s college experience gave him an opportunity to learn skills related to collaboration, time management, teamwork, self-belief, communication, responsibility and leadership. In order for Brandon to be successful in his professional endeavors in the near term, my husband and I felt like he needed to enhance these essential skill sets to set his career up for success.

“As his mom, I naturally worry the most about his well-being and happiness. I know that he will face a lot of challenges on the pro circuit and that it might have been a bit more comfortable for him to stay in college.  But I also know that my son loves tennis and his aspirations are focused on playing at the highest level on the ATP Tour. He now has a window of opportunity to pursue this dream, and his family is 100% behind him. We are beyond excited for Brandon to embark into this next chapter of his life.”

I asked Cris how Brandon is feeling about the decision, a lifelong dream to become a tennis professional. “Brandon knows that the road to the elite level is filled with uncertainties, but he also has a strong belief in his ability to improve and adapt to the pro level,” she said. “Brandon works extremely hard and manages the ups and downs of being a tennis player pretty well. I believe he is really looking forward to playing pro tennis full-time and that he will enjoy most aspects of the experience, as long as we are lucky enough to surround him with the right people.”