Wildly popular and still considered one of the best doubles teams in the world at the age of 41, Mike and Bob Bryan are looking forward to this Sunday’s hometown reunion.

The Bryan Bros. Tennis Fest returns to Camarillo and the Spanish Hills Country Club after a two-year hiatus, just a few miles from where it all began for the all-time winningest doubles team in tennis history.

The twins will be joined by some old friends in a day of fun and celebration, and all for a good cause. Former Ventura County resident Sam Querrey and the Bryans’ former Davis Cup teammate James Blake will take on the Bryans in an exhibition. Tracy Austin, Rick Leach and Hank Pfister have been added to the sold-out Pro-Am, and the day will be capped with a performance from the Bryan Bros. Band as good friends Jim Bogios of the Counting Crows and James Valentine of Maroon 5 will join in.

All proceeds from the day go toward the Bryan Bros. Foundation, which has given out more than $1.3 million over the years for deserving kids and local youth programs, including the Ventura County Junior Tennis Association.

Event director Dave McKinney reported all the sponsor/VIP tables have been sold, and that there are still individual tickets available for $125 (children under 18 are $50) and can be purchased on the website: www.BryanBrosTennisFest.com.

“It’s always great to be able to come back to our community where we grew up and to see everyone,” said Mike Bryan, who still has a home at Spanish Hills and splits time there and in Florida, where Bob and his family are based full-time. “It’s great to see Terry Lynch from the VCJTA and all our friends from Santa Barbara. It really is like a big reunion.”

The last two years, the Bryans have focused on a unique golf and tennis event with all-time great golfing legend Jack Nicklaus located in Florida. The third annual “Fore Love” charity tournament will take place again this fall and combines golf and tennis pro-ams, raising more than $1 million for the Nicklaus Children’s Health Care Foundation and the Bryan Bros. Foundation. 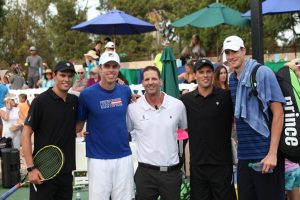 “We will still do that event, but we wanted to come back and be able to play in front of all our SoCal fans,” Mike said. “We’ve been on tour now for 21 years and we’re winding down. I still have my place out here at Spanish Hills and am spending some time here.”

Mike said there is no timetable on when the twins will finally retire from a career that has seen them capture an all-time record of 118 doubles titles, most times ending the year No. 1 (10) and most Grand Slams with 16.

“We haven’t really finalized anything,” Mike said. “We know we’re going to tee it up again next year and that might be it. We still do some great things on the court and we’re still having fun doing it. But we haven’t decided on anything yet.”

With the USTA Jim Hillman Southern California Junior Doubles Sectionals set to take place next month, SoCal juniors will have another opportunity to earn valuable points in the Bryan Bros. Doubles Race as the year comes to a close (https://www.socaljuniortennis.com/bryan-brothers-doubles-race.html).

“We love the game of doubles and it’s given us so much,” Mike said. “We think every tournament should always have singles and doubles. The Bryan Bros. Doubles Race really lets the juniors compete for something big with the winners in each divisions earning a trip to meet us out at Indian Wells during the BNP Paribas Open. It’s been huge and the SCTA has done a great job with it. We hope we can bring it some other sections.”

Retirement will come someday, and Mike said the twins are leaving their options open on what they will do after they hop off the pro tour. “We would love to be involved in the game in some way,” he said. “We may try some TV and we have a fun book project we’re working on.”

MORE ABOUT THE PLAYERS COMPETING SUNDAY:

BRYAN BROS: Former Stanford All-Americans and NCAA team champions; Career highlight was clinching the Davis Cup for the United States in December of 2007 against Russia (they were undefeated that year and they have an amazing and record setting 24-5 mark when playing for the US); Won the Gold Medal for the US at the Olympic Games in London in the Summer of 2012; Been voted the “Fans Favorite Doubles Team” for 13 years in a row.

SAM QUERREY: Standing 6-foot-6, he grew up in nearby Thousand Oaks. The 31-year-old has a career high of No. 11, while his best Grand Slam results include reaching the semifinals at Wimbledon and the quarterfinals twice, and he has also made the quarterfinals at the US Open; Has 364 wins on the pro tour and has been ranked in the top 50 eight times. Has won 10 singles titles and he’s captured five doubles championships; Enjoying a solid 2019 campaign, he reached the finals of Eastbourne and the semifinals at New York and Houston, while having a nice run to the quarterfinals at Wimbledon, upsetting world No. 4 Dominic Thiem.

JAMES BLAKE: A two-time All American at Harvard and the No. 1 player in college tennis in 1999, he now resides with his family in San Diego; Reached career-high of No. 4 and was the No. 1-ranked American; He won 366 matches on the tour and was in the top 100 nine times and in the top 30 five times; He captured 10 singles titles in his career, while being a finalist 14 times. He won several Davis Cup matches for the USA, and helped bring the Cup back to the US beating Russia in Portland in the finals in December of 2007; His book “Breaking Back” was a best seller and inspired readers the world over and he was named the Arthur Ashe Humanitarian of Year recipient in 2008; He is currently the Tournament Director of the ATP Masters 1000 Miami and he does television commentary for Tennis Channel.