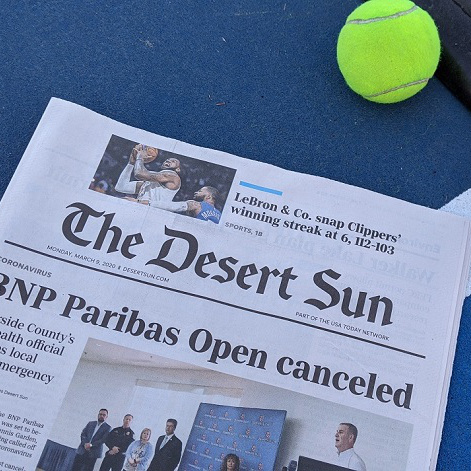 The cloudy and gloomy skies that settled into the Southland Monday morning matched the mood of tennis fans everywhere – especially those here in Southern California. The forecast for the week was wet and rainy. Many, like myself, woke up in a literal fog, and had to re-check their Twitter feeds. It felt like a bad dream.

Just a few hours earlier on Sunday evening word spread fast that the Riverside County Public Health Department had declared a public health emergency for the Coachella Valley, including Indian Wells, because of the potential spread of coronavirus. There would be no BNP Paribas Open, a SoCal tennis ritual for so many fans, players, stringers, coaches, and the list goes on and on. Many will forever remember where they were, or what they were doing, when they got the bad news. There would be no tennis watching for the foreseeable future. 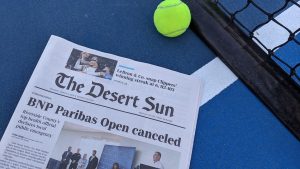 Some of the USTA SoCal staff that had already ventured 110 miles southeast to the desert and had checked into hotels got in their cars and returned home. One of the highlights of the first week for the USTA Southern California is their association with Wayne Bryan and the Bryan Bros. Doubles Race. Points winners from the 2019 junior season were accumulated and winners were to be announced by Wayne and his sons Mike and Bob at a special ceremony Thursday night in Indian Wells.

“It was devastating they had to cancel the BNP Paribas Open, but we have to put the safety of all the fans, players and coaches first,” said Trevor Kronemann, USTA Southern California Director, Junior Tennis. “We will look to re-schedule the USTA Southern California Bryan Bros. Doubles Race 2019 awards and we will get back on the courts at some point. I know it’s disappointing to many, but we need to heed caution at this time and remain safe.”

On Thursday, word came down that the Miami Open would not take place due to ongoing concerns regarding coronavirus, while ITF World Tour events will not take place until at least the week of April 20. That includes the big ITF Grade 1 International Spring Open Championships in Carson being put on for the first time by the USTA SoCal and set for March 23-29. The Easter Bowl the following week has also been called off.

There will be a lot of tennis missed on the courts with no Indian Wells, but there is word the tournament will be postponed and possibly played after the US Open or in November. These are some of the SoCal storylines tennis fans were looking forward to seeing during the BNP Paribas Open, and I am confident we will see these unfold at a later time:

Kronemann said plans are being made to possibly reschedule the Bryan Bros. Doubles race ceremony and do it during the Friday at The Ojai – if it is played – on April 24. Kronemann said it’s important for the winners to be recognized and released the following top point-winners for 2019. They are as follows:

Be sure to check back to this site often for updates on all the tennis events in Southern California.