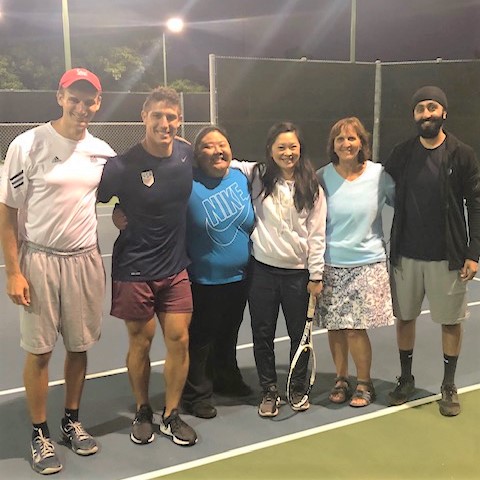 USTA Southern California Co-Area League Coordinators for the Los Angeles area, Debbie Halim and Michelle Kramer have both managed stressful yet rewarding professional careers while building successful leagues in a region that is small geographically, but by far the most ethnically and age diverse of any other area in Southern California.

“We have young people in West L.A. to Koreatown,” said Kramer, a Tarzana resident who has been the Los Angeles ALC since December of 2016. “We have it all. We have Bel Air and multi-millionaires and then people who find $30 to join the league something they have to think about.”

The 30-mile total area Kramer and Halim organize has always been a two-person job. As co-Area League Coordinators for a 30-mile radius of Los Angeles that stretches from Santa Monica to downtown, the pair is well in tune with how recreational and adult league tennis players are feeling about returning to the courts during this trying and stressful time of the COVID-19 pandemic.

Surprisingly, both Halim and Kramer are getting feedback from their older players who just can’t wait to return to the courts, while the younger players are being more cautious and understand that more time may be needed before things get back to normal.

“The older players are like, ‘Let’s start the doubles now,’ ” said Kramer, a Tarzana resident who has been the Los Angeles ALC since December of 2016. “I have the 45-and-over group clamoring and wanting to play tennis. While my under 40s are like, ‘We can wait’. I’m hearing that more from under 40s than I’m hearing from a 60-year old. I’m 65 so I think it’s more a generational thing. I think for the 30-year olds their concerns are maintaining a job, caring for their family and staying healthy.”

Kramer retired on June 12 from her job as Vice President of Marketing Clearances for Sony Pictures Entertainment while Halim is an administrative hospice nurse who has had to serve time on the front lines in recent months during the pandemic.

“In my job as a hospice nurse, I mostly coordinate and schedule staff, so that part I am already so used to and it has always come easy to me,” said Halim, a West L.A. resident who became an Area League Coordinator a year after Kramer in 2017 after serving more than 10 years as an Adult League captain. “My work in hospice, especially before when I was in the field, has taught me to speak to anyone about pretty much anything, and that can be very helpful.”

Kramer said her job required her to be customer service oriented and she had to deal with different personalities. “Organization skills, multi-tasking, good communication skills and working under tight deadlines in my career has helped me in job as ALC and a team captain,” she said, adding that the most rewarding part of being an ALC is exposing more people to tennis opportunities.

“To me, the most rewarding thing of being an ALC is bringing people together through tennis,” Halim said. “In our L.A. area, we have people from all walks of life, different backgrounds, ethnicities and cultures. On our court, everyone is treated the same. I actually never realized how diverse my teams are because I was never taught to identify someone by their color of the skin and then – subconsciously or not – judge them by that. I have only come to notice that earlier this year when one of my guys said that he really enjoyed playing on my teams because of the different cultures that make up our team.”

Halim was born and raised in Switzerland and grew up playing and competing in different types of sports like swimming, equestrian, badminton, rugby. Even dabbling in classical ballet for years. When she moved to the U.S. for college, she swam and played water polo.

“After that, I got an opportunity to play professional women’s tackle football, so I signed up for that,” Halim said. “After a total of six seasons on the gridiron and a couple of pretty bad injuries, I decided to hang up the cleats, and try myself at a contactless sport: tennis!

She immediately fell in love with the sport, and shortly after starting to play was invited to play on a USTA League team. “I literally lost every single match I played,” Halim recalled. “I took tennis classes offered by the city, met other players around my level, and we decided to form a team. Unfortunately, there were no league teams around, so I decided to put my own team together and captain it. That was back in 2008, and I have captained USTA tennis teams since.”

Kramer sees only great things ahead for her area, and will continue to enjoy tennis once play resumes. “Tennis is a great form of exercise, stress relief and competition all while building life-long friendships,” she said. “It is truly a sport for a lifetime and I hope to be playing for many more years. I watch players in their 80’s who still play – I hope to be one of those players in the future!”