PRATT: Tennis On Campus Gives Players Chance To Stay In the Game

Former UC-Irvine varsity tennis player Luca Marquard just wasn’t ready to give up the game he loved  so much and for so long once his eligibility was complete in the spring of 2018. While many like Marquard seek out the ITF Futures professional circuit during the summer and fall following their last collegiate match to fill that competitive void, Marquard instead chose to join a USTA Tennis On Campus program as a new law student at USC.

“A lot of my friends and people I talked to said they had put a lot of energy into tennis and they were completely done, but for me it is what the exact opposite,” said Marquard, originally from Germany who played one season at Pepperdine before three more for the Anteaters. “I just had a really good experience in undergrad and it just got more fun and more fun for me playing college tennis. The last year was the most fun and I just poured everything into it. And then once you’re done it’s just such an abrupt cut, such an abrupt end to what I had been doing for the last 10 or 12 years of my life.

“I’ve been practicing six, seven days a week and then all of a sudden you play your last match and you are faced with, ‘that’s it? Now it doesn’t matter anymore?’ So it’s kind of weird. Even if it’s at a lower level I just wanted to kind of keep that team experience going a little bit and find a new competitive setting.” 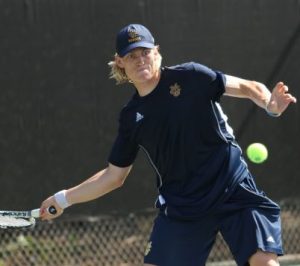 This weekend, 32 teams from 17 SoCal colleges will compete in the Southern California Tennis on Campus Section Championship for five coveted spots at Nationals. The SoCal TOC Sectionals are a part of the new USTA Southern California Signature Series and starts on Saturday at Great Park in Irvine.

A majority of those competing this weekend do not have the same experiences of playing NCAA Division college tennis as Marquard does. Having a former varsity player compete for them is a definite plus as TOC rules allow for one male and one female former varsity player. But USC Tennis Club Presidents Maya Prakash and Meghan Acampora unfortunately won’t be able to call upon Marquard this weekend as his busy law school schedule will keep him off the courts this weekend.

It was Marquard who led the Trojans to victory a few weeks back at a tournament hosted by UC-San Diego that included UC-Santa Barbara and defending national champion UCLA.

Marquard, who graduated with a degree in Economics in 2018, said the experience of playing club tennis compared to varsity tennis isn’t all that different.

“I hadn’t played a tournament match in over a year,” Marquard said. “Even if it’s at a lower level, I don’t think the butterflies you get are any different. You know it matters and it’s a different sort of pressure. Now, everybody expects you to win, probably to win easily. And you want to prove it to everyone, and you want to prove it to yourself. And at the end of the day it’s just another guy on the other side and you just want to win. And I just wanted to keep that going.”

Marquard is no different than a lot of college players who early on think they can turn pro after school. “But then I realized that was not going to happen to me,” he said.

He played a few ITF Futures events while in school but like a true economics major knew the pro circuit wasn’t for him. “There are too many good players between me and there. I know a lot of people play and it’s a lot of fun and they reach No. 800 in the world rankings and that’s great. I just feel like it would be more frustrating than fun if you are not seeing any upward movement. I think it would be great to be 800 in the world, but I feel like I’d have to invest so much to get there that it wouldn’t be worth it.”

Justin Yang is USTA Southern California’s Social Tennis Coordinator running the Sectional event. He said UCLA is loaded once again and will be the favorites to win while USC and Cal Poly-SLO have a few new recruits that should make for a competitive event.

“This year, SoCal has five bids to Nationals and this is one of the largest amounts of bids in recent history for our section, so it’s going to be very competitive going into the tournament,” Yang said. “Nobody wants to be that last team that is just short of making it.”