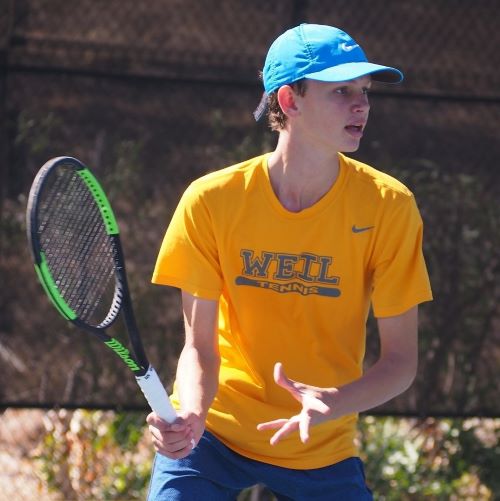 A high school senior year lost, Noah Henderson simply decided he wasn’t going to sit around moping about not having a senior ditch day, or graduation ceremony, or all the other rites of passage that go along with that once-in-a-lifetime moment when your 12th-grade high school year ends.

It’s been more than six weeks since the recently turned 18-year-old Henderson left his comfortable life as a Weil Academy senior in Ojai and returned home to Waimea, Hawaii, on the Big Island of Hawaii to be reunited with his family, including twin sister Ana, mother Karen and father Dave Henderson.

“I think it is very easy to become self-absorbed during this quarantining Covid-19 time,” said Henderson, who will play his college tennis at Chapman University in the City of Orange in the fall. “As a teenager, who likes computers and loves to game, it would be very easy for me to spend my entire day in my room, thinking about me: doing my online school, doing my homework, playing my games, creating my drawings, and only coming out to feed my body and work on my physical health.”

Ever since he and Ana were little kids, Henderson’s parents have repeated the saying, “Love they neighbor”, ingraining the phrase into the youngsters who would do yard work for the elderly and donate portions of their allowance and give it to charities.

Once Covid-19 hit, Karen urged her children to find ways while at home to help their ’ohana, a term in Hawaiian that means extended family and community.

“My mom loves to sew and thought making masks would be a good way to get two wins for one: free masks for anyone that needs them and her children learning to sew before they both leave for college in the fall,” Henderson said. “I have to admit I was a bit skeptical at the beginning but it has been really rewarding. The sewing is easy, it’s fun to do it with my sister, and feels really good going to the post office a couple of times per week and mailing out the masks.”

Weil Academy founder Mark Weil admits the past six weeks have been tough, especially for those who chose to remain at the academy during this time instead of returning home to their families. He couldn’t have been more surprised when he received what he calls “mask masterpieces” from the Hendersons as each of the masks were personalized with initials for the Weil Academy players, coaches and teachers who have remained on campus.

“As a senior, I am of course disappointed about the end of senior year activities that I will miss such as senior ditch day, graduation, and celebrating with my friends,” Henderson said. “I am also sad about not playing tennis in the spring semester of my senior year.  Not only was I looking forward to playing in the tournaments like The Ojai, but I was also really hoping to be in top form as I joined a college team.

“But honestly, I cannot complain nor dwell on these disappointments. This crisis is so much bigger than me and my senior year. People are struggling to pay rent, put food on their tables, attend doctor’s appointments, and care for their relatives in safe ways. They are also worried about retaining their jobs, or, like so many here in Hawaii, a state that depends on the completely shut down tourism industry, how they will pay for their families using unemployment benefits. This is not a time to focus on me, but rather to focus on helping others.”