SoCal’s WTT Teams Adjust to Life on the Road 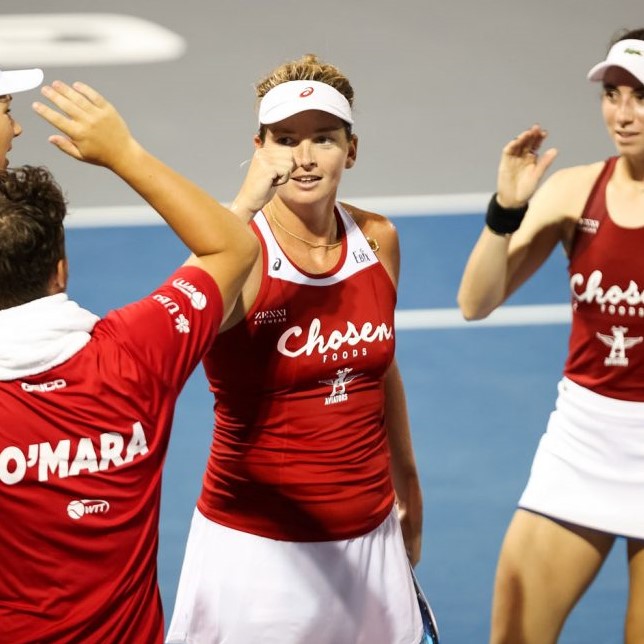 When Troy Morrison was appointed as team president of the San Diego Aviators early this year, he surely expected to watch his World TeamTennis squad battling on center court at the Omni La Costa resort in Carlsbad, where the team plays its home schedule. Instead, what used to be a six week swing across the country has been reduced to a whirlwind three-week marathon in West Virginia, where the league of tennis superstars is staging its confined 2020 season amidst the ongoing pandemic.

“There is no doubt we miss the Aviators fans – they are the lifeblood of the organization and their cheers surely do make a difference late in a set when our players need that extra push,” Morrison tells USTAsocal.com. “However, the team has enjoyed being in one location, as the travel during a normal WTT season is quite rigorous. We also know our fans are watching at home and it means a lot to the team.”

The SoCal teams are on par heading into the third weekend of play. Both are 3-6 overall, behind Taylor Fritz‘ pack-leading Philadelphia Freedoms (7-1) and Chicago Smash (6-2), who feature San Diego phenom Brandon Nakashima.

The Breakers and Aviators met during the opening weekend, with San Diego rolling to a 23-16 team win, thank to a dominant finale in mixed doubles. Ryan Harrison & Nicole Melichar thumped the tandem of Johnson/Klepac to lock up the Aviators’ first win on the young season. San Diego dominated again in the teams’ second encounter, behind lopsided wins by Harrison in Men’s singles, and Vandeweghe/Melichar in Women’s doubles.

Both teams are competing in West Virginia in similar fashion to the upcoming NBA slate that confines players to a perpetual bubble while engaged in competition. Players are tested regularly for COVID-19, and a positive test result – like that of popular American star Frances Tiafoe – will result in their immediate dismissal from the event. The same is true for players who may skirt the rules, as Danielle Collins did recently by going outside the venue’s “bubble.”

Despite the changes in location and scheduling, Morrison notes that the high level of WTT action has not subsided. “(The players) love the intensity of World TeamTennis, where every point matters, and they are focused on winning the King Trophy and the significant prize money that comes with the trophy.”

Still, fans in both regions are certainly disappointed that their local teams will not play on home turf in 2020, and many wonder if a lost season could hurt their home team in the long run. But Morrison has a more positive outlook on the future of his Aviators and the league in general, due in large part to the massive increase in television exposure on Tennis Channel, the ESPN networks, and CBS Sports Network.

“Our season is taking place over the exact time frame it was supposed to and each team is playing the same amount of games that were scheduled,” Morrison said. “…We think this year’s increased exposure is a great springboard for the league for 2021 and beyond. We anticipate being back in front of our great fans in 2021.”

As for the team president, the semi-permanent change of scenery has proven a unique introduction to the front office of San Diego’s WTT organization.

“I love being home with my family in San Diego, and no doubt, it is tough to be away for a month,” he said. “However, the entire staff of World TeamTennis has come together to make this season happen with an almost unfathomable amount of moving parts in an incredibly short time and it is an honor to be part of the team.”