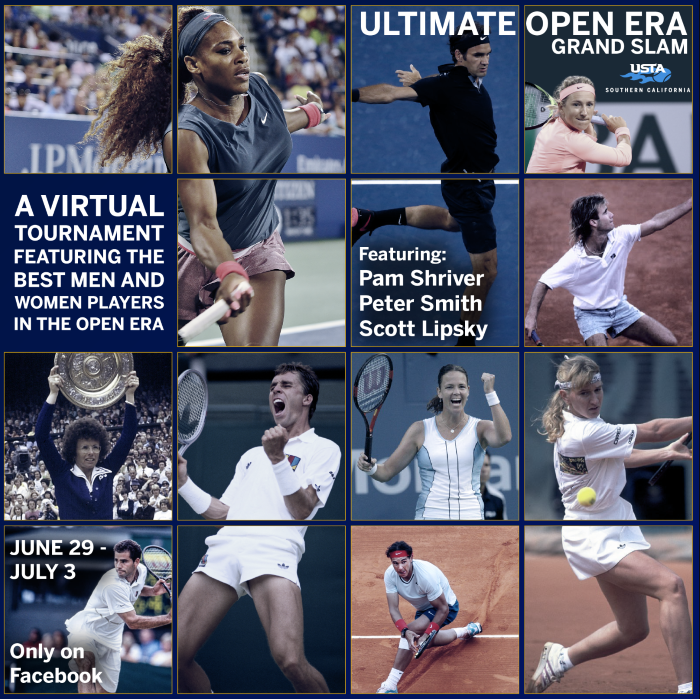 Missing the excitement of professional tennis during stay-at-home? Quench your thirst as virtual fans from across the globe descend on Southern California this week to witness one of the greatest tournament fields ever assembled. The Ultimate Open Era Grand Slam will pit the top 32 major winners in Men’s and Women’s tennis history against each other, leaving fans to determine if the eventual champion in each bracket is, in fact, the greatest player the sport has ever known.

Follow along by downloading the brackets, then watch the panel break down each round daily starting June 29 at USTA SoCal’s Facebook page  then relive them a second time on the USTASoCal YouTube page.

Seeded by total number of career Slam wins (with ties broken by number of matches won), regardless of equipment or playing surface, the players compete at the height of their careers. The most recognizable faces in tennis are in the mix – Roger Federer, Rafael Nadal, Novak Djokovic, and SoCal great Pete Sampras represent the top Men’s seeds, while Serena Williams leads the Women’s bracket along with Steffi Graf, Martina Navratilova, and Chris Evert in the top spots.

Southern California legends are in the mix as well, including Tracy Austin, Billie Jean King, Lindsay Davenport, and Michael Chang.

Each match in the men’s and women’s draws will be examined by USTA Southern California’s Scott Lipsky, a 2011 French Open mixed doubles champion, and the Director of Player Development and College Readiness at USTA SoCal.

On the Women’s side, International Tennis Hall of Famer Pam Shriver headlines the discussion. A remarkable 21-time majors doubles titlist (plus a mixed doubles title as well), Shriver is best known today as one of the finest color commentators in tennis broadcasting, working with ESPN, The Tennis Channel, and BBC.